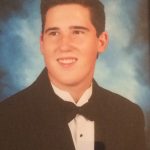 I started having small, involuntary movements around the age of seven. These impulses went unseen for a year or so until my parents finally noticed. Thinking I was stressed, they bought me a stress ball and largely forgot about it. However, several months passed without any noticeable decrease in my twitches. Now realizing it was something more than stress, my parents figured it was psychological. I then began to see a child psychologist monthly. Again, after several months there was no improvement in reducing these movements. My psychologist recommended that I see a neurologist. It was then that I was diagnosed with Tourette’s syndrome.

Only being eight at the time, I did not fully understand the significance of my diagnosis. I could not have predicted the obstacles and challenges I would have to overcome. Upon my diagnosis, I was soon placed on medication. The medicine helped greatly and most of my tics were suppressed. Elementary and most of middle school flew by without any worries. It wasn’t until the end of middle school that I began to struggle with my tics. The surplus of hormones in my body exacerbated my Tourette’s. I began twitching more frequently, and people began taking notice. When asked about it, I would say that I was cold or just nervous. I soon began to fear that people would realize I have Tourette’s syndrome. This fear of people discovering my disorder only made my tics worse.

One instance stands out as the climax of my buildup. It occurred during the eighth grade in English class. We were assigned books to read and had to present in front of the class. Throughout middle school I avoided presenting as much as possible for fear of twitching in front of many of my friends and peers. Unfortunately, there was no way of getting out of this one. Upon presenting my book to the class, I found that my worst fears were coming true. I was having an outburst in front of my whole class. I could not focus on my presentation and had to spend a few minutes alone in the hall to calm down. Eventually I was able to come back and finish my presentation, however the damage was done. I was petrified of what people thought of me. I was scared that I’d be ridiculed. Knowing that I was going to be questioned, I decided to be honest. For the first time in my life, I was ready to be open about my diagnosis. When the inevitable questions came, I answered with complete honestly.

I was pleasantly surprised to find that everyone was welcoming about my Tourette’s. My friends were all very accepting and did not see me as any different. Many stated that they had noticed my tics for years and had not thought anything of them. I felt as if a huge weight was lifted off my shoulders, and because I was no longer scared, I saw a noticeable decrease in the number of tics I was having.

Life can be hard when dealing with Tourette’s syndrome. In my case, it caused a lack of self-confidence, which made school a challenge during middle school. Ultimately, I’m glad I had an outburst during my eighth grade book presentation because it forced me to be honest with myself and my peers. As it turned out, I was accepted for who I am and it allowed me to regain my self-confidence. I now no longer worry about my tics and whether or not anyone notices. I have come to terms with my diagnosis and attribute it to helping me accept myself for who I am. Tourette’s does not define me; rather it is simply one of the many things that makes me who I am today.