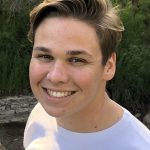 I was six, sitting at home on my couch around Halloween watching a cartoon. I kept moving my jaw, but I didn’t understand why. I just had this urge to move my jaw in a way I never had before, when suddenly my jaw locked. I began crying profusely and yelling in pain, asking my mom for help. She rushed me to the hospital and while waiting, I couldn’t control my eyes rolling and twitching. One hundred years ago, I would have been thought to be possessed and needed an exorcism… but in today’s day in age, I was diagnosed with Tourette Syndrome.

Tourette’s Syndrome is a neurological disorder in which my brain tells my body to do irrelevant, repetitive movements. The best way to explain Tourette’s is that it is like having an itch and it won’t go away until you itch it. These movements are considered tics, and there are two main types of tics: motor and verbal. I have had numerous amounts of ticks which include: licking my shoulder, rolling my eyes, jumping up and kicking my behind, clearing my throat, clicking, and doing the sign of the cross, just to name a few. When I was first told that I had Tourette syndrome, I didn’t quite understand what was wrong with me. All I knew was that I had to take multiple tests at the hospital such as CAT scans, EEG’s, and blood tests.

How do I explain to my fellow first graders that I have Tourette syndrome? Do I try to explain to them something I don’t even completely comprehend myself? Do I just tell them my brain is broken? I eventually decided to tell them the intriguing experience of going through the CAT machine, and how I had all of these colorful electrode on my head in the EEG. Eventually as I grew older, I began to understand what my syndrome was and what it meant. I learned how to try and keep my tics to a minimum, and how to explain my Tourette’s syndrome to someone new. As I grew and developed, I learned a secret which helped me with my Tourette’s – public speaking.

Many people do not enjoy public speaking, and others are absolutely terrified of the thought of talking in front of a group of people. However, I find it the best way to help me with my Tourette syndrome. When you are up in front of a group of people, reading or presenting, you have all the power in the room. You have everyone’s attention, and you control what happens in that moment. If you make a mistake, you continue reading as if nothing happened, and no one will know the difference. Having this power helps my mind forget that I have Tourette’s. All of my tics and any anxiety go away while I am speaking in front of a crowd, and it is as if I never had Tourette’s in the first place. Tourette’s has opened so many opportunities for me, because it has challenged me. Tourette syndrome hasn’t kept me from living my life, but in contrast, it has helped me live my life to the fullest. It has allowed me to teach others about an unknown or misinterpreted disorder. Tourette’s doesn’t define me, rather it is apart of who I am that I have fully embraced. I embrace my Tourette’s syndrome, and make it mine.