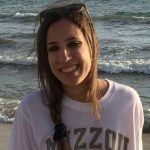 In first grade, my teacher ran out of the room, called my mom and told her she thought I was having a seizure. Thankfully, I wasn’t, but we did wonder why my eyes were involuntarily rolling back into my head. Over the next three years, we saw pediatricians, ophthalmologists, neurologists, movement specialists, psychologists, psychiatrists, and others I can’t even recall. Ultimately, the diagnosis was Tourette’s Syndrome. Life with Tourette’s Syndrome includes moments of frustration, distraction, anger, embarrassment and sadness. However, Tourette’s also fills my life with a sense of satisfaction and accomplishment, empathy and sympathy.

After my diagnosis, I blamed my tics on contact lenses, sore shoulders, tickles in my throat and anything else that seemed to make sense. However, by seventh grade, I discovered that I didn’t need to make excuses. My teacher, Julie Witzcak, introduced us to Camp Twitch and Shout which showed me a whole world filled with people who had Tourette’s. We heard from campers at Camp Twitch and Shout, saw videos depicting their activities, and learned what it meant to live with Tourette’s. The most important thing about Camp Twitch and Shout was that every camper understood every other camper, and camp existed without any judgment, staring, questioning or discomfort. I realized that although I may have been the only person in my world with Tourette’s, the real world was filled with others just like me. Suddenly, I felt free to tell others that Tourette’s caused me to clear my throat uncontrollably, turn my thumb incessantly, roll my eyes oddly and blow on my hand repeatedly. While I also suffer from Obsessive Compulsive Disorder and Generalized Anxiety, others understand those disorders (or at least, they think they do). On the other hand, Tourette’s is something entirely different. I was suddenly and unexpectedly free to discuss my disorder, to explain to people that while my noises might be annoying to them, they should just imagine how annoying they were to me. At least they could walk away from me!

Gradually, my close friends understood and learned to tolerate, even ignore, my tics. It took others a bit longer to grasp what I described. Most of them had never heard of Tourette’s or thought it appeared only in the form of outbursts of inappropriate language. Few, if any, really understood Tourette’s. So, I found myself using every opportunity to explain the disorder. I also face dozens of new customers every day at the pizza place at which I work. I hold it together because I am no longer afraid to face my own reality, and I am prepared to dismiss those who cannot understand or appreciate it. In the end, most people with whom I shared my experiences simply did not know I had Tourette’s or did not understand it at all, and they thanked me for enlightening them.