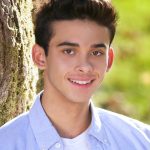 Growing up with Tourettes syndrome was not easy and still is hard. Life has been way different as a kid with this disability. When I was younger my body was always moving in class, during sports and in public. At first I thought these random movements/twitches was some kind of curse because I had no idea this was a disorder. Throughout all of my years of schooling including the present day, my ticks have and always will impact me. People will stare and even ask me if I am okay. My response is always the same. I tell them straight up that I have Tourettes.

During middle school I was a multisport athlete. I played track, basketball and soccer. I am not trying to brag but I am very good at sports. I am a very wild and athletic person. During my sports, I tick all the time. My Tourettes affected my track the most. During track I had a tick where I had to twist my ankle and it was very hard to over come because it would slow my times down for the races that I would run. I realized it would only make it worse if I tried to stop it. So, I just had to let it happen. My main tick that always bothered me during basketball was a neck twitch/shoulder-shrug. During soccer all of them tended to happen for some reason a lot more. Some ticks happened more than others in my sports but they all happened. I just let them happen and let me be me.

I’ve had some meaningful occasions in my life. One in particular was when I worked with a school psychologist in training who also had Tourettes. At the time I was only in 8th grade but the experience stuck with me. His name was Matt Frank and I really looked up to him. I helped him with some of his presentations at the schools he worked. At one of his major presentations, I got to speak and tell the audience what teachers can do to support kids with Tourrettes Syndrome. We became very close friends. He is now working as school psychologist in Hawaii. For my high school senior Theology project, I completed my own presentation on Tourrette’s Syndrome. Many students and teachers listened and I credit Matt for giving me the courage to stand up in front of people and educate them about Tourette’s Syndrome.