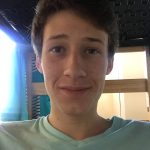 When I was younger, it did not affect me much because I never thought about it. I was just a kid, why would I? Now that I am older, having Tourette’s Syndrome has impacted my life in many ways, some well and others not so well. Whenever my anxiety is bad, my tics will be more evident, and I get very self-conscious as to what others may think about me. During high school, a lot of people would occasionally ask me why I do something (which was a tic) and I would tell them I’m just sick right now or make some excuse because I was embarrassed about it, and I thought I would be made fun of like I was in middle school.

I have had a bunch of energy my entire life, and with that came more tics. High action sports, like soccer or running, became a major help for me to attempt to control my tics, as they let me exhaust some of my energy and relax, thus allowing me some more control over myself. Today, if I don’t do some sort of sport my tics still get bad, and there is nothing I can do to stop them unless I exercise. Whenever my tics are bad, I am unable to focus, which causes me to do bad in class and act 100 percent a different person because I cannot think straight either. Until I started sports in high school and practiced more often than we did in middle school, I was not my normal self very often.

Many people that I tell about my condition never believe me at first because it is not the stereotypical disability everyone thinks Tourette’s is, i.e. screaming random phrases. The best and continuous experience I get from Tourette’s is my girlfriend who I have known since kindergarten. Because of her severe anxiety disorder and other problems, we connect better than anyone else I have ever known, and we can help each other calm down or control our self when we are having some issues or are very stressed. This continues to be extremely meaningful to me because others in the past have not wanted to put up with how I am, or could not understand why and would just make fun of me.

Because of the way I was treated as a pre-teen and teenager currently, I know that those with worse conditions than me do get made fun of even worse. My freshman year, I know I wanted to go into a profession where I could make a name for myself and show everyone I am capable of success, as even teachers have told me I would not succeed at certain things because of how I am. By becoming an actuarial scientist, I know I can become a major success since I have the desire backing my decision, and will to learn. With this, I can show that success is always possible, even if you have a mental disorder.