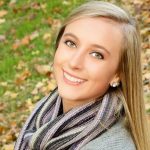 I was diagnosed with a form of Tourette’s syndrome, Tics, at 10 years old. I am currently 18 years old and have been living with this disability for 8 years now. At the time of diagnosis, I was making the switch from elementary school to middle school, a stressful time in a young girl’s life. I, first, began making sounds similar to a clearing of the throat. My parents realized one day, while stuck in traffic driving to Pittsburgh, that I was clearing my throat every so many seconds. My mom, obviously irritated, yelled at me to stop making that sound. I teared up while trying to explain that I couldn’t help it and didn’t know what was wrong with me. This was where it all began.

As the time came closer for me to attend middle school, more symptoms started showing. Wrinkling of the nose and a slight rolling of the eyes began to occur while the clearing of the throat was slowly vanishing. In middle school, people started to notice that I was doing abnormal things with my face and would ask what was wrong with me. As I would explain to each person my diagnosis, my friends would have my back, but others joked about it. As my four years in middle school dragged on, the symptoms came around less and less.

Now we have come to the transition from middle school to high school, slightly less nerve wracking than the middle school transition, but still scary. The symptom of the rolling of the eyes started to come around more frequently again. It wasn’t as noticeable this time. It started to get to the point that if I didn’t tell someone about my diagnosis, they had no clue I even had a disability.

I continued to do sports throughout my high school career just like any other student. The symptoms don’t affect sports too much, other than running track. While running workouts, I noticed my body would start doing some of the symptoms randomly as if an attempt to calm myself down while running. This still happens to this day.
During my junior year of high school, I was diagnosed with anxiety, after having an anxiety attack at school. I had never experienced this before and was shook up. I ended up in the ER and after multiple tests they figured out I had anxiety and thyroid complications along with Tics. This helped to correlate how the Tics and anxiety would work hand-in-hand to come around when stress was triggered.

Now we are entering the transition from high school to college. Applications, decisions, and scholarships are all stressful causing the symptoms to slowly return, but adding a new symptom of popping my ears.