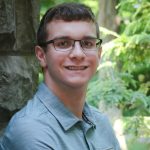 In my mind, life with Tourette’s Syndrome has been as normal as can be. I have lived with TICs all my life and do not know life without them. If I were to take an outside perspective on my life, I would say that my TICs have been an obstacle. However, I do not to let my TICs set me back, or let them be an excuse for failure.

One of my oldest memories of my Tourette’s being an obstacle for me was when I was in art class in third grade. We had a substitute teacher and I was drawing at a table with my friends using colored pencils and colored markers. My TICs were giving me a hard time, more than usual. I was making loud squeaks, throwing my arm around in the air and occasionally flinging my pencil. Not long into the class the substitute teacher sent me into the hall, she thought I was purposefully disturbing the class by making noise and throwing things. I remember being sad about being in the hall, annoyed for being yelled at in front of the class, and a little angry for being disciplined for something I could not control. From in the hall I could hear inside because the door was opened slightly. I heard the voices of most of my class mates trying to defend me, saying things such as “he can’t help it,” “it’s not his fault” and “you should not have sent him out.” They all knew I had Tourette syndrome, unlike the substitute. After what seemed like forever, but was probably no more than a minute, the substitute teacher came out into the hall, to tell me that I could come back to class. I lightened up very quickly after that, and continued to work with my friends.

If this experience has taught me anything, it would be that there are people who support me and understand what I am going through, lessening the burden caused from my Tourette’s. However, if I did not have Tourette’s I would not have had this bad experience to begin with. Therefore, Tourette’s only get in my way I don’t hate having them, but they are annoying.