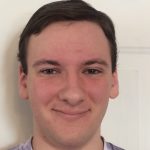 Before I knew what Tourette’s Syndrome was, I observed that my dad’s face was often very active and in motion. I then realized that I faced a similar issue: my face would never stop moving, and I would often make little noises because my throat felt as though it was closing. When I turned eight, I began to understand that the reason for all of this was Tourette’s. At that point in time, it had become very active. My mother took me to a neurologist, and he diagnosed me with Tourette’s, suggesting that I receive medication for it. Being the stubborn one that I’ve always been, I refused the medication, and we tried alternate methods such as seeing a chiropractic neurologist and a kinesthesiologist. They gave me “exercises” that I had to do on a weekly basis. It seemed eternal, but the situation slowly began to improve.

Every September, I created a new PowerPoint on the disease; another lengthy and awkward presentation on why I couldn’t stand still during that very same presentation. I was one of the luckier ones; my classmates accepted me for who I was simply because I offered an explanation. Oddly, it was the older generation who were often incapable of understanding…that is, until I explained what it was.

For instance, I was auditioning at a music festival, one that I would go on to participate in every year that I was eligible. My tics are generally more active when I am nervous or when I am excited for something. This judge noticed, and commented that I shouldn’t “snarl” when I was playing; he thought that it was a voluntary act and that I was doing so because I had messed up in the piece. I later explained to him what the situation was, what Tourette’s Syndrome involved, and how I was affected. Years and years went by, and he judged the festival every year. With his new understanding, he listened more to the music rather than looking or listening to me. His latest commentary about my playing was that it sounded “professional”, and that it was a pleasure to hear me play. He looked past the obvious and heard the music behind it.

The years have gone by, and I’ve explained my behavior more times than I can remember. Less than forty-eight hours ago, I went to an open house for an honors program in my top college. I’ve had an interest in this college for quite a while now, and this caused me to seek out other people who would be attending. I found someone else who was just as excited to attend as I was, if not more. This was to be my first time meeting her. Although she did not mention it at all, and didn’t notice it to the best of my knowledge, I felt like I had tic-ed up a storm. I am coming to the realization that it just doesn’t matter anymore. I am who I am. (T)Simply myself.