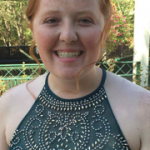 Growing up with Tourette’s Syndrome has definitely helped me grow into the person I am today. Starting at a young age I’d always had odd things I’d do, whether I’d be moving my nose, squishing my eyes closed, or opening my mouth wide for no reason. My parents never really thought anything about it because most kids do weird things, and they eventually stopped talking about it. Fast forward to middle school where my tics became worse. I’d shake my whole head, make vocalized noises, and shake my whole body. My parents eventually began to become more and more worried after I had voiced numerous complaints about students at school who would make fun of me and scheduled my first appointment with a neurologist my eighth-grade year. The main reason why they scheduled my appointment was because of one girl in particular who was rude to me beyond belief. The girl sat behind me in my English class and had told me to stop twitching on multiple occasions, even taking it to our teacher and then the office because I was “disrupting class”.

One day, I was having a very bad day and my tics were worse than normal and she grabbed my head and held me down until I stopped, but this only made my tics even worse. She held me down until our teacher came back into the room and yelled at her. I was embarrassed beyond belief and wanted nothing more than to curl up and hide. I wouldn’t have been this upset if anyone else was hurting me, but this girl was one of my best friends and she hated the fact that I had something wrong with me because it made her look bad.

After my diagnosis, she didn’t believe me when I said I actually had something wrong with me and continued to abuse me in such a way that she had before. Eventually, she did start to believe me, but told me that she “couldn’t be friends with someone who was a freak”. She said that she couldn’t be seen with the girl that had a problem or a “twitch”. This girl had been my friend for years, and I’d always exhibited signs of Tourettes and it didn’t bother her until middle school because now she wanted to be popular and important, but I was holding her back. She eventually stopped talking to me and hanging out with me, but it was definitely for the better.

Because of moments like that one, I’ve learned to educate my friends on Tourette’s Syndrome and make sure they’re fully aware of what’s wrong with me. I was medicated for a while but decided about three or four months ago to be taken off of the medication. I believe that the tics have come back and are as bad as they were before, but I’m completely fine with it now. Everyone has their own problem and mine just manifests itself differently than others. There’s nothing wrong with who I am and who I want to be. I refuse to allow Tourettes to get in my way of living, and I hope I never have to deal with someone like my “friend” again.