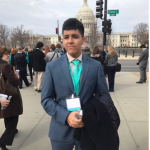 Hello, my name is Alexandro Herrera, I am 17 years old and I am a senior in high school. I was diagnosed with Tourette Syndrome when I was 11. At that time, I was in a middle school which was a charter school. It was hard for me because I had a lot of vocal tics. The school then suggested that I go to the doctor to see what was going on. That was when I was diagnosed. Upon receiving TS, I was very shocked and troubled. I didn’t know if I was “normal” anymore. I started attending therapy at NYU thanks to my mom and God. Later that year, I decided to make a presentation to give to my peers to explain to them about what I had. When I finished I was congratulated by my peers, teachers, and family. I realized something that day, that presenting was something I enjoyed to do.

As I moved to high school life with TS became a bit harder. My tics increased a bit. Freshman year was an intro to what I had to deal with for a very long time. In my sophomore year I gave my presentation again and it was such a relief. Everything was going very nice. But a few months after my presentation, my tics got progressively worse. During the months of January to March my tics were the worse they have ever been. It was so much that I would constantly leave school early because my tics were too high. This change also impacted me when it came to taking the train. I developed anxiety for public transportation due to the uncomfort that I felt when people would look at me just for twitching. I remember asking God, “Why was this happening to me? What have I done wrong?” At the end of March my tics got a lot better. Than I had realized why God had put such a hard road ahead of me. It was too teaching me that I could handle a lot more than I thought I could. Two verses that got me through were: Jeremiah 29:11 which says for I know God has perfect plans for me and 2 Corinthians 12:9 that states in my weakness his power is made perfect.

I transferred this past summer to a great school which helps me a lot when it comes to everything. I currently attend Franklin K. Lane and my all my teachers as well as my principal are very kind and understanding. They too understand that no disability is an obstacle for anyone. I am really thankful to my mom and dad who have been there for me, my family, friends, and siblings. I want to let anyone who is struggling with Tourette’s, that this is just a name, a condition, that already is a part of us and we don’t have to ever try to be someone else than you already are.