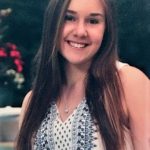 When I was about twelve I started getting random tremors that would cause my arm and leg muscles to tense up and shake for a couple seconds. This may not seem that bad but when it happened five times walking down one hallway it started to get annoying to deal with. It was really confusing and kind of scary because neither I nor my parents knew what was happening. We went to the doctor who sent us to a neurologist who then told us that I had a mild form of Tourette’s. As time has gone on my tics have changed from tremors to vocal sounds to eye rolling and some others. Looking back on my life I can see what I thought were just weird habits in my childhood were other tics that I had. One that stands out is when I was eight and always tightening my ponytail. I felt a compulsion to pull it as tight as I could; originally my mom thought it was just a nervous compulsion, but we now understand it was one of the first tics I experienced. I developed a bald spot on the back of my head which I remember my babysitter inspecting and my friends at school asking about. I was uncomfortable with people asking about it and hated that despite wanting to stop, I still felt like I had to complete the task. I never wanted Tourette’s to interfere with my academics or relationships with people. I can recall asking my teacher to go to the restroom, so I could go somewhere and not have people stare at me while my whole body tremored. However, I never missed entire lessons or let the stress of Tourette’s keep me from receiving first honors and keeping my high school GPA a 4.0 or above. Additionally, I’m an active participant in my school’s theatre program and several other organizations in my school community. I have never let the fear of judgement of my tics stop me from doing what I love and helping others. My little eight-year-old self would have turned away so as to not have people question her, but I now am open to questions and want to explain what I’m doing to spread awareness for Tourette’s and let people understand what it’s actually like to have it and lead somewhat of a normal life with it.