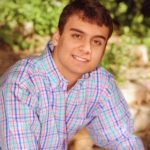 I was diagnosed with Tourette Syndrome at the age of nine and my life stopped being the same after that. In the beginning the tics were not as severe but still made me different than other kids my age. Trying to control the tics became my daily goal. It was very difficult to understand all the facts about my condition but I wanted to succeed and become a productive member of my community so I learned to live with the tics and kept participating in my daily activities. However, in the beginning of 8th grade something happened that changed my life forever. Entering puberty in combination with increased anxiety and stress over school, made my condition worse. I developed coprolalia and started swearing without being able to control it. At the same time my motor tics became so severe that would prevent me from performing simple tasks. There were times I had to be fed because of motor tics that would make me drop everything from my hands. Other times I had to use a wheelchair because my legs were shaking and couldn’t walk. My life was threatened at times when my vocal tics were out of control. I was kicked out of almost every public place; library, cinema, park, airport and restaurants.

At times I wished I had no legs or arms instead of Tourette’s because people understand this kind of disabilities but they could not understand me. I have been judged, hated and yelled at. Sadness and frustration were so overwhelming that were driving me to giving up till I realized this was only temporary.

After graduation from middle school, I set a new goal for myself; by the beginning of high school, I should be able to control my tics and keep pursuing my future goal which is to become a lawyer. Instead of giving up I decided to play an active role in my community and became a member of Tourette Association of America, participating in fund raising events and advocating for myself and other kids. However, this would not be possible without the help of my family and a special program at Rogers Memorial Hospital that included intensive outpatient therapy, teaching of strategies to lessen or control my tics, and psychological support. This took dedication, perseverance, commitment, diligence, and time. At the end of this program, I was a different person full of hope and ready for new challenges.

All the struggles I went through over the past nine years were instrumental for my growth and made me a stronger person. The experience of physical and emotional pain made me have more sympathy and empathy for people with disabilities. This experience made me so strong that helping other people in need became one of my goals. I am currently a freshman at Carroll University majoring in criminal justice. My ultimate goal is to go to Law school and become an attorney for kids with special needs. I managed to receive seven prestigious awards/scholarships upon my graduation from high school for academic excellence and my volunteer work, a fact that gave me even more confidence and strength to fulfill my future dream. Now, I strongly believe that I can face every challenge that comes to my life, and although it’s not an easy path I am positive and committed to success.