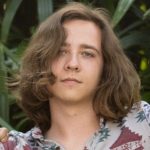 Pity is not something I seek or accept. Simply stated, I have a disorder that makes part of my brain malfunction. I was diagnosed with Tourette’s Syndrome (TS) at 7 years old — and I am a stronger person because of it. I have been extremely fortunate: While others with TS have life-shattering involuntary tics and vocalizations, mine are now managed. That’s not to say I haven’t had problems. Tics and obsessive thoughts are two attributes I’ve experienced since early youth. I have no doubt, though, that these struggles and how I’ve triumphed over them will continue to serve as the foundation for my perseverance, gratitude, and passion for music for the rest of my life.

The tics started in elementary school. Classmates probed and prodded with questions and offered acute, cutting observations: “What’s wrong with your eyes? Why are you twitchy? Your hands are weird. You’re weird.”

I fought to stay away from school to avoid the stares and to quell a mounting dread. Mornings were miserable — tears, pleading, agony until my mother gave in. When I went back after one 10-day stretch, one kid offered: “We thought you were dead.”

There were reasons besides the tics that fueled my refusal to go to school — many that I wasn’t aware of at the time. Now I know that TS can be accompanied by symptoms including oppositional behaviors, obsessive compulsive disorder, and obsessive thoughts.

In an experience well beyond the typical “earworm” of a song on endless loop in the brain, I felt tortured on what I now call my “White Christmas” days, named for an episode of “Black Mirror”: As a blizzard rages, a man is trapped inside a shack for years as punishment while “I Wish It Could Be Christmas Every Day” blasts through a stereo.

I felt equally punished: powerless to silence thoughts from repeating and repeating in my mind, to infinity.

Doctor visits and trial medications became a part-time job in middle school. During one attempt on a new med, I gained sixteen pounds in thirteen weeks. Thankfully the weight dropped within a year when I switched medications.

Today, I manage my symptoms; a stranger might not notice anything. Medication is part of my regimen, but solace comes from other sources. I found at an early age that when I am playing guitar, my tics stop. Songwriting releases stresses that catalyze the twitches. Reading and movies take my mind off of my tics. But above all, along with love and support from my family, music has been the most powerful savior.

It isn’t a stretch to say I must work harder than many of my peers to earn high grades and enjoy everyday activities. But I am always cognizant that I have it much easier than many with TS — and I will never forget that. I no longer dread the outside world. I embrace it. And I am grateful.

Another TS upside: I have a pretty solid excuse for not being great at math.