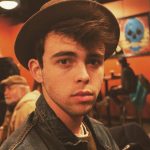 I have never been shy about having Tourette’s. I didn’t know it was something to be “ashamed” of. My brother Wyatt, my cousins Jake and Katheryn, and my uncle Kenny were all diagnosed with the same disorder that I had. So, to me tics and noises were completely normal. When I started school people would ask why I was making noises or why I would make and repeat movements. I would tell them that I had Tourette Syndrome and explain what it was. Not long ago, a Youtube channel entitled “Tourette’s Guy” gained popularity. I remember watching the videos and feeling hurt and disappointed. I had to convince people that most people with Tourette’s don’t act this way. Cursing inappropriately is a stereotype of people with Tourette Syndrome. I became ashamed and developed insecurities about my disorder because people saw it as “comedic entertainment”.

Tourette Syndrome is so much more than cursing or screaming, it is a real disability and brings real problems. I took a stand and decided I’d refuse to curse at all, as well as make sure to stand up for anyone I saw being teased or bullied, especially about something they cannot control. I choose not to curse because it further separates the stereotype from the truth about Tourette’s. People say “You can’t have Tourette Syndrome, you don’t curse!” and I use that as an opportunity to educate them on what Tourette Syndrome truly is. I explain to them that there are infinite other kinds of tics that a person with Tourette’s can have.

Throughout the rest of my educational career, I became one of the more well-known and “popular” students. Moving to Pennsylvania from New York gave me an outgoing personality and made me stand out in comparison to most of my peers because I was “the new kid”. This gave me a fresh start and new opportunity to educate people. In sixth grade I found my passion in theater and music and began to expand on my lifelong love of science and astronomy. I’ve helped other students deal with their own disorders and struggles ranging from family issues to mental disorders and even other kids with Tourette’s.

Being open about my disorder shows kids who are self-conscious that it is possible to still be successful and well liked even if you feel different. Now when I talk about my disorder I have an important reason to openly and honestly share about what it’s like to have Tourette Syndrome. I don’t do it because I want to be brave, but because I want to inspire others who are struggling to be open and proud of every aspect of who they are. Having Tourette’s has molded me into who I am today; a proud individual who is passionate about helping others celebrate all aspects of who they are as well as someone who doesn’t let his disabilities get in the way of him chasing his dreams.