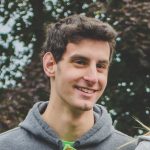 September 18, 2010, is the day that changed my life forever. That is the day I went from living in the shadows to becoming a spokesperson for tolerance and acceptance. To tell the story right I have to start in 7th grade. I was having episodes of uncontrollable movements and noises and had no idea why. After many visits to specialists, I was finally given the answer: Tourette Syndrome.

Fast-forward to September 18th. I’m at a middle school cross-country meet, listening to the officials reviewing the rules. As usual, I’m ticcing and making noise.

The officials were unaware of my TS and thought that I was just trying to be rude and obnoxious. Immediately they told me to shut up. I realized they were not educated. I tried to explain it, but was again told to shut up. Long story short, I was disqualified because of a difference that I couldn’t control. They took away my number; six years later I still remember it: 5033.

I had two choices: be a victim of intolerance or do something about it. I chose the latter and decided to enact change. I wanted to show the world that being different was okay.

It’s a funny thing trying to make a difference in the world. When I started out I was so young and naïve that I never thought for a second it wouldn’t happen. Since that cross-country meet, I have traveled the country as a motivational speaker, teaching over 85,000 students in 150+ schools a message I call Living Loud, which means being proud of who you are and being able to show that off to others.

Through Living Loud, I have seen the true power of being different. My life as a person with TS had two parts – before and after that cross-country meet. Before it, I was happy to go about my life not worried about those around me. I knew I was different but that was something I planned on keeping to myself. After the meet, that wasn’t a possibility.

I remember a conversation I had with my father a few years into my speaking career. During a speech earlier in the day I had been asked “if there was a cure for TS would you take it?” to which I answered a definitive no. He had trouble understanding why I wouldn’t want a cure, and I told him that I have been able to meet so many amazing people and make a difference that I would never have thought possible without this crazy disorder. Sure, it can be painful – I spent my entire freshman year of high school in a wheelchair – and it can be embarrassing, but I would never trade it for the world.