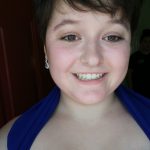 My life with Tourette syndrome began abruptly my eighth grade year. Seemingly odd behaviors started to surface. Ranging at first, from dropping my head quickly, to later when the upper half of my body would bend suddenly downward and my leg would jerk up to meet my head. As you can imagine, this was a stressful time for me… Regardless, I was very excited to begin my high school career the following fall! Though evidently, all that excitement and anxiety ended up doing nothing to prepare me for high school and everything to worsen my tics. The first few weeks at my new school, that should have been about making friends, I instead spent in and out of doctors’ offices; all the while wearing my throat raw and my muscles sore with screaming and jerking motor tics.

All of this alarmed my new teachers and they certainly didn’t hide it. I remember being sent out of class almost every bell, often with by being told to just go the nurses’ office to “calm down”. After a brief hospitalization for testing for a different medical problem, my teachers and administration called a meeting with my mother and I. They reported to my mother that I had been asking to leave class every bell and missed too much school for them to accommodate. To top it off they had asked me to sign a contract of sorts if I wanted to stay, which had basically stated I was to report all medication changes and attend school every day- despite the number of times they had asked for me to leave early. My mother and I decided the school wasn’t treating me appropriately and so, I was withdrawn and attended online school the remainder of my freshman year.

This experience really felt detrimental to my story at first. It wasn’t until later that I realized what strength and motivation it had given me. That motivation is what drives me to seek out and create better treatment, understanding, and community for people like me. People who may not be accepted or understood whether that be because of their disabilities, illnesses, or differences. This experience has prepared me for real life adversities faced by those with differences like tourettes. I have for the past two years stood in front of all my entire school at the beginning to the year to advocate for myself, and for others with Tourette syndrome. Self-advocacy is an important skill for people with Tourette syndrome, I hope to one-day help people like me achieve their goals and learn to advocate for themselves.