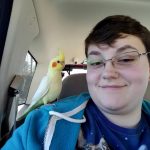 Life’s a Twitch
TWITCH, FLING, TIC, my body jolted. My arms contracting, my muscled twitching, head flinging back and forth, my legs folding in one by one. My god, please stop moving! I begged my body to stop, but it would never listen. When did this even start?!? I questioned to myself, but I already knew the answer. Birth. Even though I was only diagnosed a few years back, I’ve had it since birth.
***
“Alright bud, we’re going to go see your favorite doctor now,” echoed my Mother at the door.
“Doctor,” inhaled Ethan, my brother, as he prepared to scream, “WUUUUUUUU!”
“Have a good day at school,” she laughed as we headed out to the car.
“I don’t think she has it,” stated my Dad as he sat shotgun, “maybe Asperger’s, but not Tourettes.”
“Honey, it’s genetic. If Ethan has it, then she might also, hell I even have it,” replied my Mom as we buckled in.
Throughout the ride to the hospital, the TWITCH, TWITCH, TWITCHING got worse. We sat in silence in the waiting room until a nurse, clad in white, called.
“Randi?” she questioned, and we replied by standing up.
Ushered to a room, I sat on the examination bed.
“Doctor Wu will see you shortly,” the nurse assured.
Minutes of silence passed us by until a knock on the door broke the silence. Creeping open the soft tapping of the doctor’s feet stepped into the room.
“Hello Randi,” the doctor kindly worded, “I’m Doctor Wu, I specialize in the Autism spectrum. I’ll be taking care of you today.”
“Hello,” I shyly whispered.
He was a tall Asian male, with a firm build and a kind smile. He had a smooth voice, which I could easily understand.
“Thank you so much for seeing us Doctor Wu,” voiced my Mother, “I’m sure you know why we’re here today.”
“Yes,” he replied, “to see if Randi has Tourette syndrome.”
“Personally, I think she may just have Asperger’s,” retorted my Dad in a defensive yet respectable manner.
“Well, you see that is also under the Autism spectrum,” the doctor responded, “but seeing as it is genetic, and that your wife and son also have it, she very well could have it as well.”
“I see,” responded my father.
“Welp, let’s have you stand up and I’ll run a few silly tests on you,” the doctor reassured.
I listened and followed directions as I was told. He checked my vitals and had me walk and hold my arms out, and a bunch of other tests of which I don’t really remember. It felt like I was having a drug test to see if I was too drunk to drive. Once it was all over, I reclaimed my seat as we all gazed at the doctor.
“Although it is already somewhat obvious,” the doctor droned with a serious tone in his voice, “she in fact, does have Tourettes.”
We all knew that, but now it was official.
***
Being diagnosed has changed my life, for the better and worse. Having Tourettes has made me more patient, since I even have to wait on myself sometimes. Most importantly, it makes me unique. This curse is one of my qualities that has made me who I am today, even if it’s classified as a disability. Since I had been diagnosed, I’ve wanted to be a Special Needs Teacher. I know what it’s like to be bullied for being special needs, I know what it’s like to want someone to go to that fully understands. I work well with all children, as I’ve found out over the years, so I want to help make their lives better. I want to help show special needs and disability children that their disorders don’t define them and that they can do anything that they put their minds to. Tourettes doesn’t stop me from doing what I love, Tourettes doesn’t stop me from learning, and Tourettes doesn’t stop me from being myself.