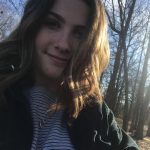 At a young age in second grade my teachers noticed something odd about me. I had just moved to Germantown Tennessee and was a new student at Farmington Elementary. During class, I would curse and scream things, interrupting the class. My teacher was not pleased with my behavior and my dad was called to the school. He took me to Memphis Neurology and had my brothers and I tested for Tourette’s. This was day one of a new life for me. This disorder wasn’t known in my area and neither was I.

I was bullied throughout elementary school but somehow managed to turn it around. During middle school I had made friends and modified some of my tics to be less obvious. In eighth grade I joined guitar club and honor choir and became more social through those hobbies. By the beginning of High school I had many accepting friends and an incredible amount of hobbies. I joined nine clubs and became involved in the schools productions. As hard as it was for me to concentrate and appear “normal”, people still talked about me. I was the only kid at my school known with TS. Everyone thought it was a fake disorder.

During my sophomore year of High school, I took biology. In class, we were given a group assignment to present a neurological disorder to our peers. My group decided to do TS. I was excited at first because this was my chance to bring forth awareness. I worked so hard on a presentation and learned so much about myself. However, during those weeks, my tics grew worse and more noticeable. It was as if all of the work I had done to hide them suddenly disappeared. I was banging my head on lockers and walks and had to visit the nurse multiple times for ice to sooth my bruises. My vocal tics were loud and distracting and was sent out of class twice. When I would get home those few days I would isolate myself and cry from embarrassment and pain. Since I was doing a report on this, people felt that I was faking it so people would notice, but the more conscious I was of my tics, the worse they got. I visited my doctor and changed my medication and took things easy for a few days and seemed to calm down. Those couple weeks of that project had identified me as the freak.

Recently I’ve signed up for a study to test a new medication regarding the disorder to help make a difference. I’ve learned, even because of the barrier this causes me, nothing is impossible. I can and will do whatever it is that I want and be successful regardless of the barriers. As a teacher, I want kids to understand that fact. As Henry Ford stated, “If you think you can do a thing or think you can’t do a thing, you’re right.”