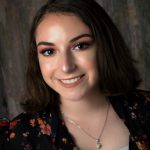 Imagine a 9 year old sitting in class, eyes rolling to the back of her head 7 times every other minute, neck jerking constantly, and hearing her clear her throat 3 times, every 62 seconds.

I was in third grade when I received a diagnosis of Tourette’s syndrome. The doctor looked upon me like a wounded puppy. “This may subside after puberty,” he said, “or it may not.” “I’ve heard that word before!” I declared. “What does it mean?”After a hilarious, albeit awkward, exchange with my psychiatrist about Tourette’s- and specifically me explaining I meant I’d heard the word ‘puberty’ before – I looked to my mom. “So what does the T word mean?”

Still pink in the face from the ‘puberty’ confusion, she said a phrase I’d heard so many times before, “it means no te quejes por que el viento va en contra tuya, mejor aprende a volar.” Do not complain because the wind is against you, better learn to fly. My family’s motto. It represents the themes in my family’s history- hard work, perseverance, pride, strength. From that day in third grade, when I learned all about puberty, and a little about Tourette’s, I became my own advocate. When people stared and gawked, I met them with compassion and knowledge. I struggled in school, only being able to read a sentence at a time without my body interrupting. So I worked harder. I challenged myself to not only keep up in school, but to excel. I refused to let Tourette’s stop me.

It took years (and many tears) to accept that MY normal would never be the normal I once knew. By sixth grade, my mom’s sense of humor paid off – I could easily laugh off the rumors in the hall that I was winking at random people (it’s a tic), I could joke about my dance moves (might as well roll with the neck jerks), and I could confidently schedule a meeting with every new teacher at the beginning of each school year to explain that I was definitely not rolling my eyes AT them (and no, Tourette’s did not mean that I would be cursing in their class).

The effect that Tourette’s has had on me will last a lifetime. While it’s true that my self-confidence was shattered for some time, the perspective I gained while putting my pieces back together are invaluable. It is my belief that some of the biggest problems in life are due to prejudgments and miscommunication. Well, when you grow up having involuntary tics, you realize very quickly that you have to be a good communicator and genuine. I do not judge people based on a perception of “normal.” I don’t characterize people on their looks. I don’t judge quirks. I make a conscious effort to get to know people so I can understand them. And most of all, I keep a sense of humor about my shortcomings.