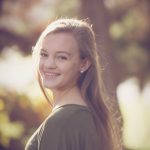 When my parents took me to the doctor for my tics, I struggled to explain how my tics felt. Sometimes I felt like I had to repeat certain motions until I got them “right” or traveled along the correct “path” with my limbs. I was sure that neither my parents nor my doctor would understand. But the doctor realized I had Tourette’s Syndrome and generalized anxiety disorder. She did not officially diagnose me then; I was officially diagnosed at age twelve.

TS was frustrating to me as a child. Certain things, like sharp objects, would set off my tics because I felt like I was mentally “touching” those objects without wanting to. Walking down the school hallways was a nightmare because I felt as if the tack strips on the walls were getting into my eyes, forcing me to lean away every time I passed one. I invented a trick in which I would place imaginary boxes around those dreaded objects to prevent my tics from starting up. It rarely worked, but I tried. My tics were embarrassing, and I told almost no one that I had Tourette’s. I became an expert at hiding my tics; most people never noticed them.

At first, I used a medication to suppress my tics. A few years later, things were looking so well that I stopped taking that medicine. My tics never completely went away, but they were manageable. However, a couple of years ago, they started coming back in full force. I have since discovered that my tics are worse when I am stressed, and as school and other activities have grown more stressful, my anxiety has worsened, and my tics have increased. Driving and falling asleep also increase the strength of my tics. However, my tics don’t faze me like they used to. They are often quite frustrating, and sometimes embarrassing, but I think that years of dealing with them has made me stronger and more patient.

One of the pivotal moments in my journey with TS was when I stopped trying to hide it. As I have matured, I have learned to embrace my tics as a part of who I am, which prepared me to be more open about having TS. In class one day, I revealed to my classmates that I had Tourette’s. They were wonderfully accepting and simply curious. Since then, a weight has been lifted from me. I have given up the shame I used to have of my Tourette’s, and that has given me confidence that I can find nowhere else. Having mental health issues at such a young age has made me aware of the mental and emotional needs of children. As such, I want to work with children in the future. Receiving this scholarship would help me reach my goals to make a difference in the lives of children. I have learned much from having Tourette’s and I will use those lessons to bless others.