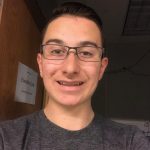 Tourette’s Syndrome can take effect of people in many different ways and my experience, like a lot of others, was different, It was years ago when I was performing at a chorus concert in 4th grade and my mom had noticed that I was blinking uncontrollably. She didn’t know what was wrong with me. I would be too if I saw my child like that. Little did myself or my parents know that I had Tourette’s Syndrome. I had gone to the Neurologist and I was diagnosed. I don’t make the uncontrollable noises, however I do have numerous body and face twitches.

Life for me as person with Tourette’s Syndrome has been pretty up and down. I have had points where I won’t even notice them, but other times where it’s nonstop. My medication does help tremendously and there have really been no issues besides having to increase the dosage here and there. The most memorable occasion I had was when I taking my first SAT and my tics were just going crazy and it was really preventing me from focusing. This wasn’t the first time, but it was probably the worst. I only ended up getting a 1020, a score that really disappointed me. There are also a lot of times where I’m talking to new people and my face will twitch a lot. People will ask me and I will just say I have Tourette’s Syndrome. At this point in my life I really don’t mind it, as many people have asked the question before. I have just had to become accustomed to deal with my tourette’s. I have been able to push through it and I have been making strides to getting my tourette’s to be as little of a factor in changing how the rest of my life goes.

I deserve this scholarship because I believe that I am a really hard working person, who has accomplished and participated in many different things in school, as well as in the community and in the workplace. I am very driven and I try my absolute best to not give up and achieve my goals. There are also times where I will set my standards too high, which can become my downfall. However I’ve learned a lot about life and I am really excited for what’s to come. This scholarship will mean the world to me, as I’m trying to be able to get in one of the best law schools after college and I want to be able to have the least amount of debt as possible. Even though with my tourette’s, I’m still going to pursue what I love and there won’t be anyone in the world to stop me.