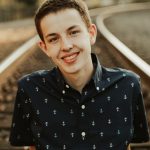 Only recently have I started thinking about my tics as Tourettes. For the longest time I just thought as them as tics, something everyone does. Then after one particularly bad outburst, my mom called what I had Tourette’s and I guess that it made sense. I had known about Tourette’s but I had never put two and two together. After that I started becoming more and more self-conscious, noticing when I was ticking, this caused more ticking. Over time I got more used to it, and even told a couple of close friends. I felt like I was handling it well and most of the people around me didn’t even know.

In high school I got involved with theater, which I love! I preform in front of a huge crowd. I had done this before when I was younger, but because I was now so much more self aware of my tics, I was worried. I can hold in my tics for a normal school day pretty well, but with theater I was around people from 8:30 in the morning to 7:00 at night. By the end of the day I was doing all I could to not have a tic spasm back stage.

Eventually I learned how to handle them better. I learned what caused them to trigger and how to calm them down. One thing that will regularly put my tics to a halt is singing. I have been in three musicals and also in choir, and I have found that before I start singing I will tic uncontrollably but just as I start to sing, they stop. Same with acting, backstage I will have my normal nervous tics, but as soon as I step on stage they stop and I am completely in the moment. But I have found times where I can’t sing and there is no stage, and I have no out.

This is what happens at my work. During the summer I worked at Chick-fil-A. I liked working there but meeting new people, combined with the fast paced work made it a powder keg about to explode. One day my manager never came to send me to lunch. It had been an hour and still nothing. I was too nervous to ask, so I just kept working. Then I started ticking; I was trying to hold it back for as long as I could. Thankfully someone asked if I would go into the fridge to get some more tomatoes. I jumped at the chance of solitude and quickly went into the fridge and closed the door behind me. This tic attack is still one of the worst I’ve ever had. Eventually I was able to center myself and get back to work. I haven’t had much experience or help controlling my tics, but I feel that I have come a long way in learning to live with them. And I certainly don’t let them hold me back!