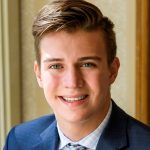 During the summer of 2009, my life changed forever after a trip to “The Happiest Place on Earth”. Videos at Disney World presented a repetition of behavioral traits too frequent and too out of the ordinary to ignore; these videos showed a young, bespectacled, hair bowl-cut, 9-year-old clicking, rolling his eyes, and clearing his throat. Concerned, my parents took me to a neurologist, where I was diagnosed with Tourette’s Syndrome.

Since then my life has been a journey that has challenged me to take control–control of the insatiable urges of Tourette’s–control of my life.

From 4th to 8th grade, I struggled to control my tics. Accepting my diagnosis, I still longed to be anyone other than myself. In high school, I started sharing my diagnosis with peers, even discussing Tourette’s on a school newscast. Having experienced adversity, and learning from it what few kids ever will, I hoped they would find inspiration to persevere when faced with their own obstacles.

As a young fencer, I spent nearly a decade training, staying late after lessons doing target work and perfecting my flèche. At age sixteen, my training paid off. I placed top 16 in my division at Nationals. The next fall, I took 5 AP classes, earning all A’s. With every exam that came my way, with every new tic that developed, I took control of the situation, often scoring some of the highest grades in my classes. This was the year I knew I could overcome any obstacle.

Summer before senior year, however, that determination was put to the test as I was elected as the Speaker of the House of Representatives at Kansas Boys State 2019. To be voted in, I stood in front of a deeply divided House and promised to adhere to Robert’s Rules of Order. That night, after being elected, I reviewed Parliamentary Procedure until 3 am.  I walked in the next morning scared out of my mind, but never allowed myself to tic. By the end of the week, I had the house running like a well-oiled machine, passing nearly 4 times as many bills as our Senate. In spite of my tics, in spite of my fear, I stood before my fellow House members and led them to one of the most productive years in Kansas Boys State history.

It would be easy to say I’ve learned from my Tourette’s, that I’ve grown because of my diagnosis. But the truth is, I’ve grown in spite of my diagnosis. In the face of adversity, Tourette’s is just one of the many things that drives me to be a better person tomorrow than I am today. I am who I am because I grow from that which is difficult. I am who I am because I’ve never been anybody else other than that lanky, bowl-cut 9 year old; the only thing that’s changed, besides my hair cut, is now I have a taste for success, and I have no plans of slowing down.