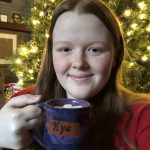 I was diagnosed with Tourette’s Syndrome when I was 9 years old. The story my mom tells goes like this. She knew I had TS pretty early in my life. She says I used to have a lot of motor tics when I was a baby. She thought it wasn’t very severe so she saw no need to get it officially diagnosed. When my brother was born, he showed signs of TS too. He had some pretty severe vocal tics when he was young, enough to disrupt his learning in school. He was 4 when we got diagnosed. Mom wanted to get an official diagnosis before his schooling started in case his tics caused any problems. She said she brought me as an afterthought, just because we were already going. When she was filling out his application the only part she had concerns about were his bad tics. When she filled out the application for me she saw how many associated disorders went along with Tourette’s Syndrome. I had displayed symptoms of all of them. She says on information form she filled out for me she had to complete cover the page with text. She was writing in the margins and on the back of the page to explain all the things the survey was asking about. That’s my version of Tourette’s Syndrome.

My tics are pretty mild for the most part. I have mostly small motor tics. I can sometimes have vocal tics but not very often. Some of the tics I have right now involve moving my hands, and feet, cracking my knuckles, rolling my neck. They don’t really bother me much. It’s everything else that makes the difference. Along with Tourette’s Syndrome, I have been officially diagnosed with OCD, ADD, Generalized Anxiety and Panic Disorders, and Depression. Unofficially I have dyslexia and dysgraphia, and specific phobias of needles, blood, throwing up, bees, and doctors. Quite the resume if I do say so myself. It runs in the family. My Tourette’s Syndrome comes from my father’s side. My paternal grandfather has it, and passed it onto my dad, who passed it on to me and my three brothers. Funnily enough, after my mom and dad divorced, my mom got remarried. My stepfather has Tourette too. We like to joke and call her the Tourette magnet.

I have been in counseling for my anxiety since I was 8 years old. I have changed who I was seeing over the years as I have outgrown the adolescent specialized therapists. I’ve been with my current psychologist for three and a half years. She is so wonderful. I have made so much progress with the help of her and my psychiatrist. The meds I’m on now, along with the strategies I have developed over the years have helped me become a somewhat normally functioning adult. My next hurdle is college.