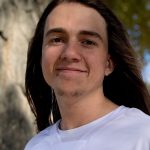 As a 5th grade student, I was initially diagnosed with Tourette’s Syndrome, though I had struggled with it for years prior to the diagnosis. I struggled making friends, and being in public areas, because I felt as though I drew a great deal of attention to myself. It was an embarrassing period of my life, where I felt very isolated from other kids my age, along with “normal” society. I didn’t feel disabled or different personally, but I felt judged that way by everyone around me.

As I began to grow older, I was recommended medication, but refused to take any, in a sense of pride for my independence and myself. I learned how to retrain my brain, and build competing responses to some of my most frequent Tics. This gave me a sense of control over myself, and my battle with Tourette’s. To this day I will struggle with large Tic outbursts, but am able to relax, and regain control of myself when I become stressed.

My passion is the sport of Lacrosse. I’ve played Lacrosse since I first learned how to walk, and will continue to play until my legs will no longer carry me.  As a 10-year-old dealing with Tourette’s, I idolized Division 1 College Lacrosse. The players were my role models, and the games were the highlight of my week. Through struggling with Tourette’s I learned about a large number of professional athletes that also dealt with Tourette’s. Seeing these athletes inspired me to set my own goals. My goal throughout my childhood was to be a Division 1 Lacrosse player, and in the Fall of 2020 that dream will be made a reality, when I take the field at The University of Delaware. I believe that my achievement of becoming a Division1 Collegiate Lacrosse player is greatly influenced by the determination and competitiveness, rooted to my battle with Tourette’s Syndrome.