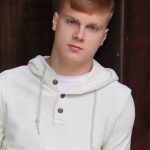 For as long as my memory serves me I have always dealt with the hindrances that result from Tourette Syndrome. I can’t recall a time where I wasn’t living in the shadow TS. Initial symptoms as a child, around the age of 5, were extreme mood swings. Next, I was tormented by urges to move and vocalize against my will. As I entered kindergarten I felt like I had little control over my body. My tics were loud enough to turn heads in a theater, let alone a small classroom, and violent enough to knock over my chair. I desperately wanted to blend in but one day, in elementary school, I was called out in front of the class by a substitute teacher. There were actually many instances that my tics would be mistaken for bad behavior. Often I would choose to plead guilty and take punishment instead of explaining my TS, which was exhausting. Despite everything, I don’t hold hostility towards anyone because I was as clueless about my TS as they were.

The TS diagnosis shocked my family. They were utterly ignorant about TS. We endured seemingly endless neurology, psychiatry, and behavior therapy appointments and experimented with medications and a myriad of holistic remedies. This was a lengthy trial and error process. To put it bluntly, I felt like a trapped, frightened animal. Once, I decided I didn’t like this particular doctor and that bolting out of the treatment room to hide behind a copy machine in the hallway
was a good idea. It was the way that doctor looked at me… like I was something under a microscope.

Academic life is challenging. It takes vast amounts of energy to focus on a task while attempting to stave off tics and invasive thoughts. Depression, ADHD, OCD, anxiety, and sleep disorders go along with my TS. I have struggled to get out of bed, go to school and do assignments. Depression depletes my motivation, anxiety plagues me with worry, and obsessive thoughts cause me to fixate on things beyond my control. Executive dysfunction is an aspect of TS that I struggle with but I’ve learned ways to improve organization and time management.

Thankfully, I have learned techniques to suppress tics to a large degree. Honestly, this is more work than just giving in to the tics, but for others’ sake as well as my own, I withhold them in social situations. With time and therapy, I have learned to cope. I have far surpassed what I ever expected in life in terms of academics, athletics, and relationships. After I graduate from high school, I aspire to begin a nursing career within the RN program at Cincinnati State followed by obtaining my BSN at the University of Cincinnati. My goal is to become a critical care flight nurse. Through my struggles, empathy comes easy to me and I want to help others. My ultimate desire is to continue to take back my life from the illness known as Tourette Syndrome.