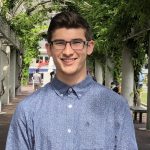 Tourette’s comes with considerable challenges. It may even, at times, feel like nothing more than a challenge, in and of itself. For a year now, I have been faced with the challenge of suddenly moving to a 100% online curriculum, including chemistry and biology labs. This has been particularly difficult for me due to my large motor tics that involve my shoulders and torso. I have always had trouble using computers because when I have tics, I lose my place when reading the screen and hit the wrong keys on the keyboard.

I’ve also struggled with instructors not believing me when I explain that I can only try to prevent my vocal tics, and when I do, they sometimes get worse. They not only distract me, but also my peers. This has resulted in a self-consciousness surrounding my tics in public and oftentimes leads to me missing important parts of a lesson because I struggle to suppress them. One moment involving my Tourette’s that I will never forget happened early in my elementary school career. At the end of every year in grade school we took an aptitude test known as the End of Grade Test or EOG’s. During this time of year, in fourth grade, I had developed a vocal tic that was usually undetectable, however, in the incredibly silent test setting it was fairly noticeable. About half-way through the math portion of the test, the proctor confronted me, she made me look her in the eyes and then sternly said “stop it.”

Tourette’s Syndrome has been a part of me for as long as I can remember. When I was younger, it was true that it felt like something that I needed to overcome. It seemed, from the way my teachers and doctors approached the topic, like an obstacle that was separate from myself. I’ve since taken a course that dealt with disability within society and it too advocated for the idea that I was not my disability, but in my case I strongly disagree. I’ve always had difficulty separating myself from my disability and I now believe that the reason for that is that it simply cannot be done. The more I progress in my study of the sciences, the more it becomes clear that every individual is nothing more than a brain. While it may be true that we are coupled with a body that enables us to fulfill many daily tasks, everything we have ever felt, thought, and perceived happened in our brains. Even the pain we feel in our body does not exist until our brain makes it so. It’s not an uncommon feeling. We all feel that within our physical vessel there exists some intangible element of ourselves and if it exists anywhere, it exists in the brain. For this reason, I cannot accept the idea that I can be separated from a neurological condition. I find Tourette’s to be integral to who I am as well as who I am to become.