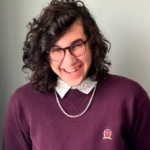 My story with Tourette Syndrome began 11 years ago at the age of six. I was diagnosed after waking up one day with uncontrollable movements including banging my head forwards and turning my body to both sides repeatedly. This was very uncomfortable, especially considering the fact that I had no clue what was happening. My parents took me to a neurologist and the rest is history.

Afterwards, I found out my school social worker (at the time) was the daughter of the President of the Tourette Syndrome Association, and I have had the wonderful opportunity to be involved with the TS community. Subsequently, I was featured in the documentary “Living with Tourette’s,” which has now over 8.6 million views on Youtube. I have advocated for myself and others living with TS or differing exceptionalities (an alternative for disabilities). I’ve educated three separate schools: two elementary, and a middle school that I attended. I did this by showing the documentary and answering questions. These experiences have helped to shape who Maxwell Plenby is today; I enjoy teaching my peers and learning from them as well.

Once the documentary was released, I was honored as a child advocate during Hope Week at a Yankees Game, with 3 other individuals who also have TS. These were Heather West, the winner of Hell’s Kitchen, Dash Mihok, an established actor and Dave Pittman, an also established singer who sung the National Anthem.

TS, however, has not been a walk in the park. I’ve suffered from daily headaches and muscle soreness for over a decade and I don’t think it will ever stop. My only escape from my TS is when I’m playing cello or sleeping. My head, shoulders and back pain can be partially helped with over-the-counter pain medication but nothing really stops it. At this point, I’m able to focus on other things to make my pain less tortuous. Explaining my struggles is important to allow others to understand me and empathize with people who are similar.

Through physical pain–not to mention the constant social rejection I’ve faced and its most unfavorable by-product, a lack of self-love– I’ve still been able to accomplish everything living with TS, that I would without. I’ve achieved a 3.5 GPA, even with my pain from TS and difficulties focusing from ADHD. I’m also an accomplished cellist and a rower. I have placed in races while rowing, and performed recitals at the HARTT School of Music.

My aspirations for a career in civil rights law, which directly tie to my excitement to be a supportive member of the Tourette’s community, in addition to other groups and communities I’m a part of, will allow me to help others who may not be able to help themselves. This profession is one of the keys to creating a culture of acceptance, which we desperately need in the world right now. To use my compassionate nature for others to its foremost ability is to do what I’m best at, advocacy.