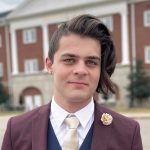 Every day people go through life, usually carrying around at least one insecurity. This insecurity might be in the back of their brain, gently nudging them occasionally, or it may be like a loudspeaker pressed against their ear, blaring and screaming that they aren’t good enough. One of my deepest insecurities used to be having Tourette’s Syndrome.

I first began developing what I now know to be tics in 2020. I didn’t think much of it initially. I figured it was just a twitch derived from having ADHD, but as the months progressed, I began to worry. More and more tics began to develop – twitches in my eyes, clicking my tongue, and eventually, I was even involuntarily saying vulgarities. It got to the point where I decided I ought to talk to my pediatric neurologist. I mentioned to her what I had been experiencing, and after talking for only about a minute or so, she affirmed that she suspected I had Tourette’s Syndrome. I was diagnosed and would later understand that I specifically had Coprolalia (The sort of Tourette’s in which one tends to tic obscenities).

As it began to develop and become more evident and expressed, my insecurity festered and bloated. I feared that people thought I was faking this disability for attention or that I was exaggerating its afflictions. I prayed to God and asked Him, “Why did you make me broken?” I struggled with this for a long time, wrestling and fighting, until at one particular lunchtime, I got an answer.

I was attending a church weekend camp, and I went into it scared. I knew very little of it and knew next to nobody there. I worried about how they would take my having Tourette’s and if they would judge me or look down on me. To my shock, nobody said one negative word about my having Tourette’s, even going so far as to comfort me in my negative thoughts. While sitting at lunch, I startlingly and suddenly had a violent tic outburst and slammed my arm onto our table from over my head, almost hitting a kind girl named Mallorie. I quickly rushed to the bathroom to avoid any more violent tics that could possibly hurt someone. Once I recouped myself, I returned to the table and apologized, nearly crying. Mallorie comforted me. She told me that God hadn’t made me this way to hurt me but to help others who felt the same way I did – to let them know that they aren’t alone and that they aren’t broken.

People every day go through life, usually carrying around at least one insecurity, feeling broken and like there’s something wrong with them. But nothing is wrong with us; our differences don’t make us lesser but only showcase the beauty of our individuality. Sure, I have those thoughts sometimes, but I now live prepared to refute them with that truth.