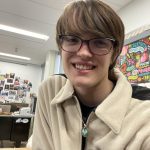 As a child, I was afraid of my diagnosis. In elementary school, one of my tics was spitting; whenever I was outside, I would repeatedly spit on the ground. Because of that, I was the only kid that was allowed to have gum during recess, which was the only thing I found that would stop it. Contrary to what my classmates thought, this was not a privilege, but rather a nuisance. Every time I opened that gum wrapper, kids would flock to me, demanding that I give them a piece. I was worried about getting in trouble, and needed enough gum for myself, so I never gave any away. Every day, while the rest of the kids were excited to go outside and play, I would be filled with anxiety, dreading the judgment of my peers.

The most recent time my Tourette’s was a hindrance happened during marching band. One of my current tics is looking into bright lights—including the sun. Whenever I’m outside during marching band, I always have to wear a hat, or I will look directly into the sun. Usually, this is no problem, since a hat is part of our uniform. However, one day we were scheduled to march in an exceedingly hot parade, and our director made the decision to march without hats for the day. He was kind enough to make an exception for me, but the other band members, particularly the trumpet section leader, mocked me for it. Because I needed to have a hat during the parade, she mocked me behind my back to the section, imitating me in an obnoxious voice to poke fun at my Tourette’s Syndrome. Under the hat, it was excruciatingly hot, and the humiliation of being the butt of the joke made me despise band, even though it is usually my favorite extracurricular activity.

Despite these setbacks, I have never looked at my Tourette’s diagnosis as a disability, but rather, Tourette’s Syndrome is a part of me. The vast majority of people have accepted me for who I am, and I know better than to waste my time with those who judge me for it. I am not ashamed of having TS, and am no longer afraid of what others might think. I have accepted it as part of me: nothing more, nothing less.