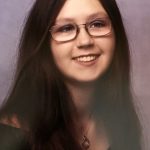 I can’t remember a time in my life when Tourette’s wasn’t there with me. When I was 4 years old, I began making squeaking noises that at first my parents thought were from asthma. It was my preschool teacher who first suspected this wasn’t the case. For the first couple of years after my diagnosis, this tic did not get in the way of work. It was purely vocal, and my classmates back then didn’t tease (I’m extremely grateful for that). However, as time went on more tics began to appear. Two of these were in the form of head-jerking and knee-knocking. These repetitive movements left me extremely tight and sore, which was a distraction itself besides the tics. It was the only thing I could focus on sometimes, leaving me irritated and tired. As a result it was hard to hang out around my classmates. Although they never said anything, I could tell it was a distraction for them as well.

I remember a brief tic during third grade that caused me to bend my knees in a curtsy-like motion. Once, it caused me to fall into the trash bin as we were in line to leave the classroom. It made a scene, and I remembered feeling like a spotlight had suddenly been shined in my face. I was embarrassed. These kinds of tics led me to the point where I would isolate myself from others and sleep between classes, especially at the start of middle school. Thankfully, those tics in particular have since passed, but have been replaced by mental tics and “just right” urges. Currently it includes re-typing then deleting a word multiple times, tapping objects in multiples of four, or reading a word at the end of a page repetitively. This has made assignments difficult, but I’ve found that music helps.

Throughout all of this, though, there is one thing I know has given me relief. The frequency of my tics drops significantly whenever I’m focused on a creative project; this could be in the form of arts and crafts to even science labs in school. I think it’s a huge part of why I began writing. For all four years of high school, I’ve been a part of the Creative Writing Magnet. I’ve competed in the Women’s Club of Newport News Art and Literature Contest and won first place in 2020 for my short story “Braving the Winter”. Altogether, writing has given me a healthy outlet for my energy and an amazing opportunity to share my experiences living with Tourette’s in the form of poetry.

I believe a bachelor’s degree in environmental biology paired with a minor in writing will play to my strengths and allow me to have a positive impact on my community and the world. By volunteering with the Virginia Living Museum, I’ve been able to help spread conservation awareness for our local ecosystems. I hope to use these skills to aid the environment and to advocate for others living with Tourette’s.