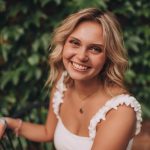 “Does Sarah have ‘tics’?” A mom at my dance studio asked. “Like the bugs?” My mom thought, but was relieved when she learned they were a mental condition, not insects on my body like a dog.

When I started competitive dance in middle school, my shoulders were sore after a long day. We got an email saying I was being disrespectful to teachers by rolling my eyes, and I got asked by friends why I made “those noises.”

These were not me though, these were my tics. About a year later, my stress and anxiety started amping up again, and followed by the tourettes which had become more noticeable, frequent, and louder. My mom asked about them, “if I was ok or if I wanted to go to the doctors,” but then I would get angry. Stop trying to make me feel weird and different, I thought. Though deep down, I knew I needed relief, I just didn’t want it, yet.

Then one day my mom told me she made an appointment at the doctor. She said my dad and her had become worried again, that I must be uncomfortable, and didn’t I want help? The strange thing about Tourettes is the person experiencing them usually can’t tell when they are going to have the tics. I was in a constant haze. When my mind chose to have tics, my body would follow. But my conscience didn’t have a say in the decision
I walked up to that appointment embarrassed and rubbing my eyes. I didn’t want any of the doctors to see my pink puffy eyebags. They gave me a chart to fill out. All asking about symptoms I was experiencing. Blinking, squeaking, and rolling my shoulders. One question left me shameful. “Do you experience uncontrollable shouting of offensive words?” No! Of course not. Who did my parents, the doctor think I was? I’m a normal kid; I don’t have this weird condition; I don’t swear uncontrollably.

That day at my appointment no progress was made. However my story finally changed a year ago. I was on a trip with my boyfriend at the time with his friends who I knew, but wasn’t close to. Because of this I was feeling anxious to fit in and my tourettes were out of control. My boyfriend noticed this and asked me, “why do you keep doing that with your eyes?” So badly I wanted to quietly say, “oh.. Um.. I don’t know.” But I did know. I knew I had Tourettes and they were controlling me. So I opened up. After this I asked my mom to take me to start therapy. Seemingly small, this one decision let me create a new understanding of myself. Now I let go of the shame I once held onto. I tell my friends about the habits now; I let them in. With the help I get I believe in my self-confidence. I am myself and my Tourettes do not control me.