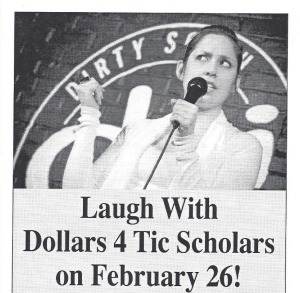 Welcome to the third post in our series to let you learn more about Chelsea White, producer of MTV’s Girl Code and Girl Code Live! Chelsea will provide a comedy show as part of our fun evening out (dinner, raffles, silent auction and comedy!) on February 26, Friday Nite with Chelsea White.

D4TS: Chelsea, what age were you when you were diagnosed with Tourette Syndrome?

Chelsea: I was four years old. I was originally misdiagnosed with epilepsy and on medication for it for about six months. 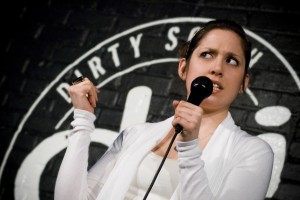 D4TS: How did friends react?

Chelsea:  I’m very fortunate to have a moderate case to where most people just chocked it up to me having some weird little nervous habits the way a lot of proper do. So I never actually told even my closest friends until I was a senior in high school. I decided to call my two closest friends and talk to them about it and they could not have reacted more wonderfully. They were basically like “Oh cool, I mean I always noticed you had some interesting little quirks but I just always thought well, that’s just Chelsea! So anyway, are we going to a movie tonight?”

D4TS:  How did your parents react?

Chelsea:  My mom suspected from a young age that it might be Tourette when I started doing some little motor tics. After we went to lots of doctors, the fifth or sixth finally diagnosed me and from what I can remember, being so young, my parents were pretty chill about it! They knew it wasn’t life threatening, so they figured in the grand scheme of things we were all very fortunate. I’m sure my mom had anxiety about it in some way because no one wants to think about their kid dealing with anything, but she and my dad were always so amazing when it came to my Tourette. They never made me feel bad about ticking even when I’m sure it had to drive them insane at times when I was really going nuts in the evenings after school! But they never ever told me to stop or be quiet or feel embarrassed about it in any way.

D4TS: Did you take medication?

Chelsea: I also had pretty severe OCD when I was younger and I did take medication for that for a little while, but never for my Tourette. When I started to get fed up with it in high school my psychiatrist told me we need to treat one first and then the other- and that treating one would also most likely help the other simultaneously by reducing some of my stress. I chose the OCD because at that time it was more stressful and intrusive for me. But I went off of it after a couple of years because the side effects started to be more disruptive than the OCD or Tourette. Now I’m very fortunate that both my OCD and Tourette have greatly waned over the years. Although very recently my Tourette has started to get worse again. It’s so interesting how it can come and go that way.

D4TS:  Are you on medication now?

Chelsea: I am not.

Stay tuned for our next post in the series when we ask Chelsea about college and Tourette!