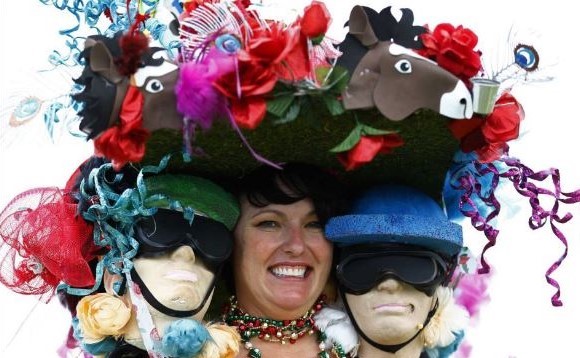 
What do we picture when we hear the words, Kentucky Derby? Horse races certainly, mint juleps, Kentucky bluegrass, “My Old Kentucky Home” echoing over Churchill Downs, but for the ladies, it’s the chance to dress up in crisp spring outfits and be crowned with a glorious and enviable hat! 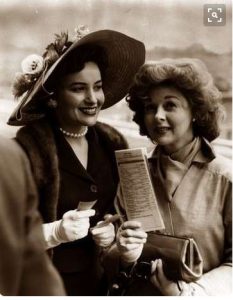 An eye-catching chapeau, bedecked with flowers, feathers, curled ribbons and more, is a Derby tradition. It calls to mind the days when the Derby grandstand was filled with the elite – the privileged upper class – heirs to industrial fortunes, property or financial institutions; ladies bedecked with such finery, who obviously did not need to hold a job, but lived only for invites to exclusive parties and the glamorous lifestyle of a turn-of-the-century heiress.

It is considered a major fashion faux pas to attend the Kentucky Derby without a gorgeously designed hat, suitable for this special social event occasion. Derby Day is a day to ‘see and be seen.’

It was understood that when one is seated in the Churchill Downs grandstand and a woman happens to seat herself in front of you with a hat that blocks your view, you just have to make the best of it. 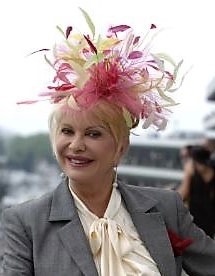 Unless you and your party “outrank” her socially, in which case you could always accidentally spill your mint julep on her outfit, which would encourage her to change her seat, in more ways than one.

Please note, however, a gentleman should always change seats with his spouse or date if a hat is blocking her view of the racecourse.

Always remember that at the Derby, a woman’s hat is an extension of her outfit. Asking her to remove it would be like asking her to undress. (Not to mention revealing “hat hair!”)

But how did Derby’s hat tradition begin? 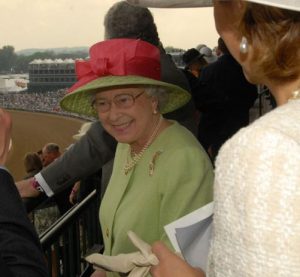 It was Louisville’s Colonel Meriwether Lewis Clark, Jr., grandson of William Clark of Lewis and Clark fame, who founded the Kentucky Derby in 1875. Clark wanted to create the American equivalent of Europe’s high society horseracing events, such as Britain’s Epsom Derby and France’s Gran Prix at Longchamps. He formed the Louisville Jockey Club with a group of investors who agreed to the construction of grandstand and racetrack on property deeded to Col. Clark by his uncles, John and Henry Churchill. Churchill Downs was born.

Col. Clark had studied the European venues, noting that the Epsom Derby used a picnic theme for its first race of the year, in June. For the inaugural Kentucky Derby, Col. Clark enlisted his wife and her society friends to invite all of Louisville society to attend a “picnic event” at the racetrack, “an affair not to be missed.” The ladies created untold excitement, and word soon spread beyond Louisville of this major social happening.

When Derby Day arrived, a beautiful spring Monday afternoon on May 17, 1875, over 10,000 excited spectators were on hand to witness a spectacle never before seen at an American racetrack. The grandstand was filled with the elite of society properly turned out in their best spring finery, complete with matching hats, gloves, shoes and parasols, mirroring their counterparts across the Atlantic.

As the Derby gained popularity, spectators from around the country came to watch not only the magnificent horses, but the parade of upper class society denizens, racehorse owners and their patrons mingling in the grandstand, oblivious to the lower classes and “riff-raff” seated on the grass below.

HAT STYLES THROUGH THE AGES 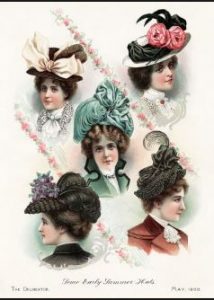 But back to the hats. Hats worn during the early Derby years were in keeping with the styles at that time. They were mostly small headpieces, or bonnets, with netting, feather or other adornment. Boring…

It was when a tailor named Matt Winn took over the track in 1902, that the Derby solidified its fashion traditions. Winn promoted the Derby as a celebration of the Civil War antebellum culture of the south, romanticized and immortalized in books and song. It was also the time of the Gibson Girl, introducing broader and highly embellished hats to American women.

Soon larger hats, bedecked with flowers, feathers and ribbons, and pastel-colored outfits began to grace the Churchill Downs grandstand. Men traded their dark morning suits for the more colorful classic seersucker suit, dress shirts in bright hues, and pants in shades of red, green, yellow, and orange. On their heads perched a straw derby or bowler.

A journalist from the 1901 Louisville Courier-Journal stated, “The seats in the grandstand were filled with gaily dressed women and men. The mass of green, pink, red, yellow, blue, all the colors of the rainbow, blending into one harmonious whole…” (www.kentuckyderby.com)

Not only did Winn promote Southern antebellum attire, but mint juleps, burgoo (Kentucky’s Mulligan stew), and other traditions were established. Winn also promoted the Derby to sports figures and movie stars like Babe Ruth and Ginger Rogers to add glitz and glamour to the event. Today you might see Chelsea Clinton, Jessica Simpson, Jamie Foxx, Ivana Trump, or Brooke Shields. 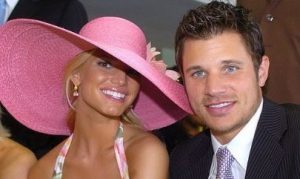 The outlandish sunhat began to appear during the wild and wacky 1960’s, when women were liberating themselves, psychedelic and neon colors were popping up everywhere and individual expression was, well, queen. Hats were already beginning their slow fade from the dictates of fashion, so it was up to the ladies to revive the charm of the Ascot race, a la “My Fair Lady.” How fun!

But the broad sunhat is not the only style seen on Derby Day. Chic, dainty headpieces called fascinators are also popular. In style over 70 years ago, fascinators have seen a comeback thanks to Britain’s Princess Kate. Fascinators are made from a simple woven disc topped with feathers and netting and secured in one’s hair with a comb. One good reason to love a fascinator— it won’t leave you with dreaded “hat hair” at the end of the day. 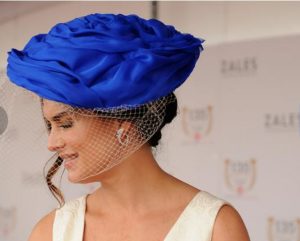 Many Kentucky millineries continue to do good business only because of the Kentucky Derby. Custom creations can run into hundreds or thousands of dollars and include anything from feathers, boas, tulle, ribbons, birds, horses, or the kitchen sink.

Can’t afford a custom hat? You can build your own topper with a few materials and a vivid imagination. The more outrageous, the more photos posted on social media and the web. Another way to be seen, right?

Show off your personalized Derby hat at the upcoming D4TS Derby!
There will be plenty of opportunities to parade your custom creation at the D4TS Derby and when you show up to the event with a Derby hat, you have the chance to win an additional prize (hats optional for attendance!)
Join in the fun at the D4TS Derby on February 25 at 6:30pm at the South County Civic Center in Delray Beach.
Register here: www.dollars4ticscholars.org/d4ts-derby