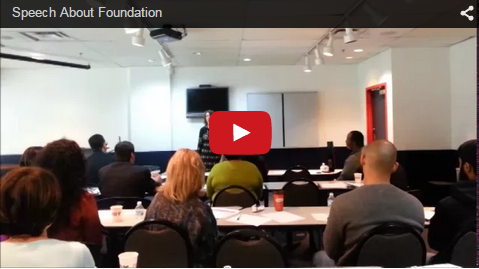 As a member of Club Awesome Toastmasters in Coral Springs, Florida, my tenth speech was coming up. The project? Give an inspirational speech. There was no better choice than to talk about the formation of Dollars 4 Tic Scholars and what our Tourette Scholarship foundation means to me. This is a 10 minute speech. I hope you enjoy the text, and I have put in a little video clip of it as well. Here goes!

Do you ever hear voices, inside your head? Have you ever felt called to do something…but you didn’t do it? Maybe right before you go to sleep at night, or when you’re in the shower, a creative idea flits through your mind, but say ME? I could never do that! Or – it’s too hard. That’s a crazy idea! I’m here to encourage you to do 2 things:  listen to those voices, and tell someone about it.

Toastmasters and guests, in May of 2013, many of you were there at the Golden Corral when, as a new Toastmaster, I gave my Icebreaker speech. I gave a quick 7 minute recap of my life, but I also took a huge leap and shared with you one of my heartfelt goals.

That day, I told you that I wanted to create a 501c3 non-profit organization whose mission was to award college scholarships to students with Tourette’s Syndrome. Why? Many of you have met my daughter Kelsey. She – and her Tourette’s Syndrome – have been my inspiration.

Tourette syndrome (TS) is a neurological disorder discovered in 1885 by Dr. Georges Gilles de la Tourette, a French neurologist. It is characterized by repetitive,  involuntary body or facial movements and vocalizations called tics.

Do you know that feeling you get when you are about to sneeze? Your eyes start to water and squint, your nose begins to tingle, you start inhaling rapidly and usually your brain even has time to think….”I’m about to snee-eeze.” You FEEL it coming on. That’s the best way I know to describe what it feels like when a tic is about to come on.

Try this – Picture yourself as a  college student sitting in class. You’re listening to the professor talk about how the area of a circle equals Pi r Squared – and she’s about to tell you the value of Pi. Your brain suddenly tells you – “I’m about to ti-iiic.” The urge comes on – and like a sneeze, you can’t stop it. Before you know it you’ve either made a vocal tic – coughing, whooping, throat clearing, or a motor tic – blinking, body movements,…or both!

Now…do you remember the value of Pi? NO. Because you’ve just lost 10 seconds worrying about whether you were going to disrupt the class, worrying whether your classmates were going to make fun of you, and worrying that if you don’t know what Pi is – how will you ever know how to figure out the area of a circle when you are an adult?

Students with Tourettes have trouble focusing in class and on their homework due these tics. In addition to being distracted by the tics, 86% of the time, Tourettes is accompanied by other conditions including Attention Deficit Hyperactivity Disorder (ADHD), OCD which is Obsessive Compulsive Disorder, anxiety disorder and anger. Tics can even make someone tired, even physically sore from repetitive movement. Another interesting fact – the urge to tic has to be satisfied- like that sneeze. Kids who manage to partially suppress their tics at school find that when they come home, they tic like crazy – because home is their safe place to let it all out. Can you imagine the daily energy it takes to keep that urge inside? You know how hard it is to suppress a sneeze!

My goodness – isn’t college hard enough already without those distractions?!

When Kelsey applied for college in 2010, we researched and found that there were no scholarships specifically for Tourette’s syndrome scholars. We found one later for students from New Jersey, but that didn’t do us any good.

This bothered me and bothered her. Toastmasters, this was the voice that was keeping me up at night.

Have you ever met anyone else with Tourettes Syndrome? It’s possible that you haven’t. People are embarassed to admit it or report it. We kept it quiet throughout Kelsey’s first 12 years in school to save her from being made fun of. Here are some statistics.

Back to my motivation. Kelsey graduated this year – May of 2014. Do you know how proud I was when my daughter walked across the stage during graduation for Florida Gulf Coast University and accepted her diploma with a Bachelor’s degree? I knew what she was up against every day – difficulty focusing, difficulty studying, difficulty absorbing the material…can you imagine our joy when she made the Deans list twice in her senior year? Armed with a degree in Elementary Education, she volunteered for a week this summer at a Tourette Syndrome Summer Camp, and now as a 4th grade teacher, she is equipped to help children learn, and as a teacher with Tourette’s Syndrome, she will bring empathy times ten to children who need extra support.

Kelsey and I had been discussing the non profit for a couple of years, but her graduation was the milestone that lit a fire under me and we decided to get moving. We had discovered a gap we believed we could fill.

Guess what. I have no non-profit experience. I have never even worked at a non-profit organization. I have started a couple of businesses, and I know my way around marketing and PR. I didn’t know if I was qualified to start a non-profit but like that urge to sneeze – I just kept feeling the urge to DO something..that voice kept talking to me. I decided to take the unproven path.

I’ll spare you the description of the hours of research we did, webinars we took, people I contacted and the laborious filing of forms that we did. I have learned SO much. The results?

Students with Tourette Syndrome have enough to worry about just to get through the day of paying attention and studying without worrying about how they are going to pay for college. If we can ease the burden of college costs a little bit, we can achieve our mission – to encourage students with Tourette Syndrome to go to college and stay in college through awarding college scholarships as an investment in their future contributions to society.

Toastmasters, there are two takeaways that I hope you’ll absorb today. The first one is to listen to your inner voice. What is urging you on? What voice keeps you awake at night? Whether you’ve figured out how to weave blades of grass into headbands and sell them on Etsy, or you’ve dreamed up a new service that fills a need, or you want to publish a cookbook or start a blog….don’t stifle the urge you feel, let it out! That idea came to you for a reason – and it is because YOU are the one that is supposed to bring it to life.

The second takeaway? Tell someone what you want to accomplish. Say it out loud…maybe at the Golden Corral! Tell your friend, your neighbor, your spouse, and tell your Mom, she’ll hold you accountable. When you tell someone what your goal is, it becomes real. Put it out there into the universe, and the universe will set the forces in motion to make it happen. Declare your goal and your passion about achieving it. Tell someone!