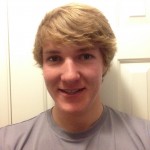 Living with Tourette’s Syndrome, in one word, has been amazing. This may seem odd but I am blessed to have been diagnosed with Tourette’s Syndrome. I am proud to share with others that I have Tourette’s and I’m not scared of what others will say to me or behind my back. I feel like my diagnosis has made me stronger and this is because I am able to fight through any of my struggles with my tics. I have three memorable occasions where my life was influenced by someone else with Tourette’s Syndrome. First, probably a month after I was first diagnosed, I remember watching Sports Center and there was a dirt bike competition being televised. I don’t remember much from the competition except for the fact that the winner of the competition, as told by the announcers, was suffering from Tourette’s Syndrome. Secondly, sticking with sports, I have to say that I enjoy the game of soccer and I recently have found out that my favorite player, Tim Howard, Goal Keeper for the U.S. Men’s National Soccer Team, also has Tourette’s Syndrome; and like me, he was diagnosed at the age of nine. Both of these experiences have taught me to never stray from my dreams even though I have Tourette’s. They have proved to me that you can accomplish anything and that I should never use my Tourette’s as an excuse, because it doesn’t limit you, it only allows you to become stronger as you find ways to suppress your tics. Lastly, and most meaningful to me, was when Marc Elliot came to my school to talk about his life. Marc Elliot had Hirschsprung Disease, but his main source of inspiration to me was when he told the whole school that he had Tourette’s Syndrome. I remember him talking about his tics and how he was thrown off a bus for them. As he continued with his story I felt like I was becoming closer and closer to him, as we both shared something in common. He told us how he was able to suppress his tics and basically defeat Tourette’s. I was speechless, he inspired me and has left a lasting impact on my life. All of these experiences have shown me how people with Tourette’s can still find success, achieve greatness, and do anything they set their mind to. Tourette’s Syndrome doesn’t limit us, it’s only a wall to climb, that based on our own bravery and inner strength, defines how we choose to live our lives.