The colors of teal and garnet represent the hope for TS scholars to complete college and enter the workforce and the world with the goal of contributing to society with boldness and confidence. The dark teal color in our logo complements the Tourette Syndrome Awareness ribbon as well as the color of the national Tourette Syndrome Association, Inc.

The garnet color in our logo represents the January birthstone of Kelsey Diamantis, after which the Foundation was named.

From www.americangemsociety.org: Garnet, the birthstone for January, signifies eternal friendship and trust and is the perfect gift for a friend.  Garnet, derived from the word granatum, means seed, and is called so because of the gemstone’s resemblance to a pomegranate seed.  References to the gemstone dates back to 3100 B.C., when the Egyptians used garnets as jewelry inlays.  Garnet is the name of a group of minerals that comes in a rainbow of colors, from the deep red of the pyrope garnet to the vibrant green of tsavorites.

To us, these colors are a beautiful combination that symbolizes support and encouragement for all Tourette Syndrome scholars. 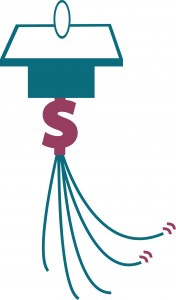