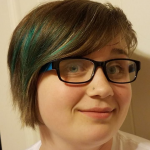 It was third grade when I started developing facial tics. I was both confused and embarrassed. I didn’t know what was happening to me. As I got older, my tics got worse. They had evolved from simple facial tics to violent head shaking and full body convulsions. There were days when they were so bad that I had to stay home from school, too tired from the muscle relaxers to do anything other than sleep.

When middle school came around, I was riddled with anxiety. No matter how painfully hard I had tried to hide them, the kids in my classes started to notice my tics. They called me names like ‘twitch’, they mimicked my tics in front of me, and openly laughed and pointed at me. It became such a problem that I often pretended to be sick to avoid going to school. In seventh grade I had to be home schooled, which was ultimately a positive experience for me.

Although I was dealing with depression during those two years, I never gave up on my dream of working for NASA. I refused to let those who were bullying me define my identity. In eighth grade I was enrolled in the local charter middle school. Despite my fears and reservations, I gave my classmates a presentation about Tourette’s syndrome. I wanted people to know and understand what my condition was, and I would not let myself hide it any longer. Eighth grade was an amazing experience for me, as it exponentially boosted my confidence and self esteem.

High school has been one of the most important and rewarding times of my life, freshman year especially. When I began to question my sexuality in freshman year, it was easy to accept the fact that I wasn’t straight. The challenges that I overcame in middle school made me realise that in order for me to be happy, I had to accept every part of myself. I was really able to start loving myself in a way I never had before. I decided to change career
paths and become an aerospace engineer, something that would allow me to combine the thrill I get from building things with my love of space. In the midst of grappling with my newfound sexuality, my anxiety and OCD were at an all time high, causing my grades to drop. I was in a horrible state of mind for awhile. I was finally put on a medication to help alleviate my symptoms and I was able to get my grades back up to A’s after months of hard work. Coming out this year as gay to my family and friends was one of the scariest decisions that I have ever made. After I opened up to others about my sexuality, I started attending meetings at the Rainbow Youth Center. Because of this my self confidence and self esteem have reached an all time high. I refused to let others define me because of my Tourette’s.