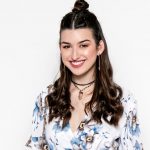 I was diagnosed with Tourette’s Syndrome around the age of 7, and it has greatly affected my life ever since. It has not always been easy living with tics and OCD tendencies, and I often find myself frustrated as a result of not being in complete control of my body. However, I have learned to live with my Tourette’s, and most importantly that a neurological disorder does not define me, but instead, is a part of who I am.

As many people with Tourette’s will tell you, having a tic is like having an itch that you have to scratch. Imagine constantly having to scratch places on your body, internally and externally. That is a small glimpse into what it is like to live with Tourette’s Syndrome, except an itch is more of a surface level, physical feeling, while a tic is more like a mental “itch” that only gets more uncomfortable if you don’t “scratch” it. Tics can be anything from excessive eye-blinking, the tensing up of muscles, head jerking, or body adjustments, to popping a double-jointed shoulder out of socket, jaw tension, or even jaw popping as well. Many of these often cause me physical pain when they flare up and occasionally interfere with school and other activities. No medication or holistic treatments have provided me with relief from my tics, but instead left me with undesirable side effects.

In social environments, I have learned to somewhat mask my tics, but it is near impossible to disguise them completely. Conversations and interactions are often uncomfortable for me when my tics are very noticeable, because let’s face it, sometimes it just looks weird. However, at the same time, I have learned that it’s okay to talk about why I’m “different” and to answer the question, “Why do you do that?” that I have gotten too many times to count.

School is also challenging at times with Tourette’s, usually in areas that deal with time constraints. Timed tests are the most difficult because the additional pressure and stress they put on me causes my tics to worsen in the moment, making it difficult to finish on time with good quality material. I have even received 504 accommodations to assist me during test taking because of this issue.

In spite of these challenges, I have been a successful student in high school and now college. Tourette’s is an obstacle that the average person my age will never have to deal with and because of that, I sometimes wonder why I was chosen to live with it over someone else. However, I have come to the realization that I was made like this because my Maker knew it would grow me as a person and become a major aspect of my life that makes me completely unique. Having Tourette’s is often awkward, difficult, and frustrating, but it has provided me with a story of perseverance to tell and at the end of the day, it has really become a blessing in disguise.