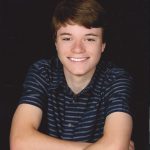 Living with Tourette Syndrome has been a life of ups and downs. Strenuous and repetitive tics were painful caused injury. Homework was stressful because I could not focus. It took hours to complete simple assignments. However, I have come out on the other side as a stronger, more understanding individual. My life with Tourette Syndrome ultimately has defined who I am.

Not many people who have Tourette Syndrome can say they had a best friend they grew up with who also had TS. Aiden and I were diagnosed a month apart when we were both in the fourth grade. I remember crying when Aiden was having a particularly difficult time with his tics at school. I cried because I knew what he was going through, and it pained me to see someone else going through struggles similar to my own. We would go on to present information to fellow students and answer questions after our mothers presented “talks” about Tourette Syndrome to fellow classmates. Aiden and I remained friends through middle school until a move separated us. I understand now that is the time I developed empathy for people who struggle socially. Also, through those talks I gained confidence and the ability to advocate for myself.

In the past, I used to wish I did not have Tourette Syndrome. In elementary school and early middle school, tics were a pain. I would come home from school exhausted from ticcing; it was then I began to struggle with depression. But in due time, I discovered how to better cope with tics by trying find ways to reduce stress. I began to be more comfortable explaining Tourette Syndrome to others. Through the affirmation and acceptance of understanding friends, I realized Tourette Syndrome was becoming a definition of who I was. Depression had ceased to be an issue in my life. Good friends of mine agree that the spontaneity of my tics add to my character and personality and ultimately make me who I am. And now I am quite comfortable with who I am.