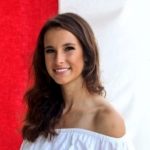 Every person on this planet is different. Every person has gifts to offer. I have realized, we are all designed differently, and it is usually for a reason. Being a teenager with Tourette’s made high school a challenge. Of course, I have had to deal with rudeness of people and the insecurities that come with the tics. However, I have had more people show me kindness, acceptance, and support than not. The things that I have learned because of my Tourette’s are gifts I will have the rest of my life.

It is important to lead by example. I have learned to be kind to others. Because I felt “different” after my diagnoses in 9th grade, I started talking to and getting to know other kids in my classes that most other students don’t talk to because they were different. It is important to be extra kind to the people that are mistreated the most and defend them from bullying. I made it a point to do both of those things. Now that I am a senior, because I have gone out of my way to be nice to everyone, I have a lot of friends and a lot of support from other students. If I am having a bad day or tics, someone always asks me if I am ok.

When things don’t go as planned, I make the most of the situation. As a leader, I have learned that if I am calm and supportive, others will be calm and supportive. It is easy to freak out when you are in charge of something and it does not go as planned. I had to learn to stay calm so that my tics would not overwhelm me and distract me from coming up with a solution. As drum major for our band, I would sleep on the bus on the way to away games in order to be rested at the games. I learned which band members I could count on for different tasks and had them help with organizing our band at every game and contest. Delegating took a lot of pressure off me. I also convinced myself that, with band, nothing would every go as planned so whatever came up was expected.

Living with Tourette’s, as a teenager, forced me to learn many valuable lessons before my developmental years were over. I have learned to keep planners and write down todo lists. I plan ahead and work ahead on anything that I can. I have learned how to close my eyes and rest for a few minutes during the day. I try to distribute my weekly tasks to two priorities per day to reduce stress. I balance rest, work and play. I learned that doing things that bring me joy and peace, such as riding horses and doing volunteer work reduces my stress and reduces my tics. I have Tourette’s and I have many gifts. Tourette’s does not define me, I do.