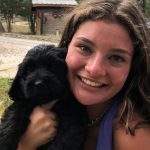 As a fourteen-year-old girl, I sat on the cold doctor’s office table, terrified and confused as to what was happening with my body. It had been an extremely stressful few months, learning that my family had to move across the country. I felt like I had no control over my life, and increasingly, I had no control over my own body. I had started making random movements and noises, occasionally at first but progressing over months to a point where I couldn’t make it through even a minute without feeling as if I would explode if I didn’t release the building energy inside me.

After weeks of tests, sleep studies, and questions, I was diagnosed with Tourette’s Syndrome. I felt a mix of emotions – some relief that I was not crazy but also fear. I thought, “Not only am I about to be the new girl, I’m going to be the new girl with Tourette’s.”  I was mortified to learn there was no magic cure to eliminate all my tics. The girl sitting stunned in that doctor’s office would be shocked to know that she would eventually view her Tourette’s diagnosis as a blessing.

My personality has always been outgoing and bouncy- earning me the nickname Bubbles.  With seemingly unlimited energy, my tics of little gasps and bounces almost blended in with my personality. Some friends hadn’t noticed, but my tics were becoming more obvious. In biology class, I slammed my hand on the desk, causing the class and teacher to stop and stare.  I knew that I needed to tell my friends what was going on. Their positive responses shocked me. Their overwhelming feedback was that my tics were what made me me.  I learned true friends will love me as I am and that I had no reason to fear what made me unique.

With my newfound morale, I made the move to Texas alongside my family. I found myself making decisions I would have been far too timid to make before. My past plan had been to hide in the shadows, but instead, I pushed to do the opposite. In my first year, I joined sports teams and clubs, made friends, and accepted leadership positions.

Medication has helped my tics at times, but approaching my overall health picture helps more.  Learning to better manage stress and improve my nutrition, exercise, and sleep habits reduces my Tourette’s symptoms.  Increases in tics alerts me that one of these areas may need attention.

Overcoming the challenges of Tourette’s gave me a new perspective on life and relationships. Most importantly, Tourette’s impacted my empathy towards others with disabilities. The encouragement and acceptance I received has inspired me to pursue a career in speech pathology to help others overcome speech disabilities and gain confidence in spite of their differences.  My diagnosis helped me grow exponentially as a person, and I will forever be thankful for my Tourette’s.