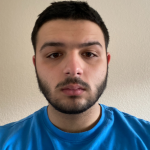 A good story should begin at the very beginning.  I was born eighteen years ago in Vegas. I met all childhood developmental milestones way ahead of the targets. My mom, my brother, and I returned to Israel when I was five.  At that time the turmoil began with cursing, hitting, and body jerking.  I was the kid who hit everyone and was labeled as the bad boy.  I didn’t understand why I was compelled to do these things and was frequently punished.

At age 14, we moved back to Vegas.  Having to leave family and friends behind, and not knowing anyone in Vegas, depression overtook me. As a result, there was a significant amount of body jerking. To cheer me up, my mom bought me a dog and it worked.

My freshman year of high school, I joined The Air Force Junior Reserve Officer Training  (AFJROTC).  At the end of that year, there was an awards banquet.  The recipients got medals, ribbons, and awards.  I got just six ribbons, others got sixteen.  I looked up at the stage, and promised myself that,  one day, I would be up there receiving ALL the awards.  This was my particularly meaningful, memorable occasion.  My childhood was marked by social stigma due to hitting and cursing and other socially unacceptable behaviors.   I vowed that night that I would work with my Tourette’s and be a successful AFJROTC cadet.  Did it work?  Absolutely!  The following year I received a national award (Jewish Veterans award).  Even better, I beat two hundred other cadets to win The Most Improved Cadet Award.  Finally, I won eighteen ribbons and one medal.

In that year, I developed yet another tic, foot stomping.  When it happened, I would make up a song inside my head. This allowed me to lessen the force of the stomping.   This in turn, permitted me to focus on studying more and thereby improving my grades.  I was also able to increase my involvement in  JROTC.

At the end of my senior year, I achieved the rank of Cadet Officer Major.  Do my fellow cadets know about my Tourette’s Syndrome? Yes they do.   I am always up front and open for discussion, if they have questions.