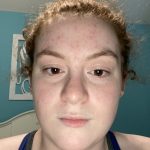 “That girl was so loud and obnoxious…she must have Tourette’s or something.” I almost choked on my crispy chicken finger as a friend’s father, seated at our table, made this judgmental comment.

My family and I were at a social gathering with friends. I was the only child seated at the “adult” table. As soon as the comment was made, my Mom’s eyes immediately met mine. Do I respond? Do I not respond? Would sobbing to him about the ignorance of his comment teach him a lesson? By the time I had gathered my thoughts, the moment had passed. My Mom’s glance told me it was best to let his comment slide. Sitting at that table, I hadn’t entirely found my voice yet.

I was diagnosed with Tourette’s syndrome when I was seven years old. Throughout my childhood, my “verbal tics” were mild, thus allowing me to enroll in mainstream schools. However, these schools were not always easy for me along the way. In elementary school, I struggled to walk in a straight line with my class because I would have to tic. During that time, squatting was a physical tic, and often the class would have to wait on me. It was challenging to remain incognito playing hide and seek, considering the periodic noises that would burst out of my mouth.

I have been incredibly fortunate to have a solid support system throughout my schooling. My family has helped me through these exceptionalities, and my parents advocated for me when I could not advocate for myself. While I knew that my Tourette’s made me a little different than my peers, I was seldom directly bullied or discriminated against. This is why the dinner comment came as such a shock to me. It was the first time I reflected and realized that many people with Tourette’s face casual discrimination all the time.

As I entered high school, my voice started to develop and evolve. My commitment to educating those around me became magnified because I wanted to give a voice to those who do not have one. I realized that the media was responsible for many of the misconceptions about Tourette’s, such as describing Tourette’s sufferers as unhinged, loud, and consistently unable to contain their profanity. I was determined to end that misconception and presented on my condition to the entire high school. I wanted my classmates to learn something while viewing me as their equal.

The content was so well received that it was later published by our local newspaper, which means the information was shared with an even wider audience. I used the presentation as a way to relate symptoms to experiences that anyone could understand. For example, I described that some tics are so compulsory that they are like a physical itch that you cannot ignore. Additionally, I disproved a common misconception by explaining that only a small number of those with Tourette’s have “Coprolalia,” which is when they shout uncontrollably. I emphasized that when you notice a person’s tic, treating them as you would a friend without a tic would be highly impactful. Educating others not only allows them to better understand the complications I face but inspires them to stand up for others who share similar struggles.

I often reflect on that dinner and the ignorant comment that was carelessly blurted out. My initial disdain has been transformed into motivation. I’m eager to continue educating others about Tourette’s. This journey begins by educating myself, which is why I want to study neuroscience. One day, I will be one of the counselors, therapists, or doctors who were so helpful to me. I cannot wait to get started.